breasts are luminous
I grab them     exaggerate their orbs
loaves of heaven
nutmeg-flecked, exuding light
Frank
10.28.06
No comments:
Email ThisBlogThis!Share to TwitterShare to FacebookShare to Pinterest

Frank Parker
from Win Po: a work in progress

Audio of our reading now available!

Audio of our reading is now available for your listening pleasure on POG Sound! George Mattingly’s poetry is brilliant. His delivery immaculate. Lyon Leifer’s ragas on the bansuri are masterful. One person said to me afterward, “Finally! The way your poetry should be heard.”

a night of poetry and music 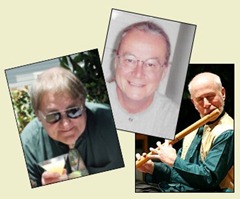 George Mattingly is a book designer, writer of fiction, essays and poetry, photographer, and one-time letterpress printer and typographer. He has been a columnist for msnbc.com and taught publishing at The New College of California, San Francisco. He edited the literary magazine Search for Tomorrow (1969–1974) and founded Blue Wind Press (1970–). His books are Darling-Bender(1970), Breathing Space (1975) and the forthcoming new & selected, a while (2011).

Frank Parker is the author of three books of poetry, Heart Shaped Blossoms: 1993-2007, zig-zag journeys (2009), and Win Po: a work in progress (2011), all from his Obscure Press. He edits the online journal Frank's Home: An Active Anthology of Verse and publishes widely on the web. He’s on the Board of Directors of POG and is the sound technician for POG and Chax Press readings. Frank maintains the web sites for POG and POG Sound.

Frank will collaborate with Lyon Leifer, bansuri master, for this reading.

O My Words
for Luis Garcia

a ring of bone

cats walk up and down

Lyon Leifer is recognized in Europe, the Americas, China and India as a master flutist who performs both on western flutes and on the bansuri (north Indian keyless bamboo flute). After early studies in Chicago with Emil Eck and Walfrid Kujala, Mr. Leifer attended the Juilliard School of Music where he studied with Julius Baker. After graduating, he became a member of the St. Louis Symphony Orchestra. Pursuing an interest in improvised raga music and flute playing in India, he then accepted a Fulbright Grant to study there with Devendra Murdeshwar, the inheritor of the legacy of the great Pannalal Ghosh. Remaining in India for five years, Mr. Leifer won the praise of Indian audiences and critics for his authentic renditions of raga melodies.
Lyon Leifer's web site
No comments:
Email ThisBlogThis!Share to TwitterShare to FacebookShare to Pinterest

A Review of "Win Po" by KEN BULLOCK

Three poems into his chapbook, Win Po, and three lines into "O My Words," Frank Parker invokes long-gone poet Lew Welch: "a ring of bone," from the title of a touchstone lyric by Lew, and of his posthumous Collected Poems.

But its not just little homages that make the poem. Line by line, in any case, Frank makes 'em fit together, with a touch light enough it seems careless at times, part of his humor: "a flute, a reed/cut from roots/a ring of bone/everyday air/skinny bird song/Palo Verde limbs/cats walk up and down/adobe yellow wall"

That's it. It's dedicated to Luis Garcia, another humorous, spare poet, but Lu's gone out on a different sort of limb: living to sing about it.

Frank Parker sings about it from living, breezily sometimes, the lines directed to this or that friend, family member ... some of them poets.

David Gitin, poet and Frank's longtime Monterey neighbor--a crosstown neighbor--and frequent presence on frankshome.org, a website hosting a community of poems and poets, is dedicatee of "Letters from Tucson," where Frank's corresponding from, now: "when I wake it's dark/light coming soon//see you then//your friend"

Finally, "Mirror in a Garden," for his daughter: "I reach for my cup/and the birds scatter."

Eleven poems, an odd number, with the qualifier, "a work in progress."

It's progress, in the sense of moving through the landscape, one he came to late, where he's seen much, once settled in.

What's exhilarating in Win Po is that rare sense of somebody finding himself, his voice--both at once--yet taking another step, and another, not stopping.

These are perceptions on the move, not snapshots so much, like the often-faded imitations of Imagism. No scent of the workshop; more like witch hazel. Bracing.

My own fine self 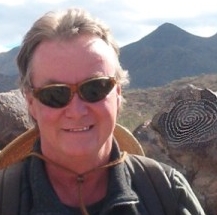